Skip to Content
This post may contain affiliate links. As an Amazon Associate, I earn from qualifying purchases. Read my disclosure policy here.
Jump to Recipe

Spaghetti squash serves as a great side dish as a healthy alternative to pasta.  When you know how to cook spaghetti squash perfectly, chances are even picky teenagers will like it! If you are looking for a way to increase healthy nutrients into your diet and lose weight, spaghetti squash is the perfect addition when cooked properly.

Several years ago I made spaghetti squash and thought it was terrible. Unfortunately, it was a long time before I tried it again. Sadly, I realized it wasn’t that I didn’t like it, but just that I did not know how to cook spaghetti squash properly! I want to help you from making that same mistake. 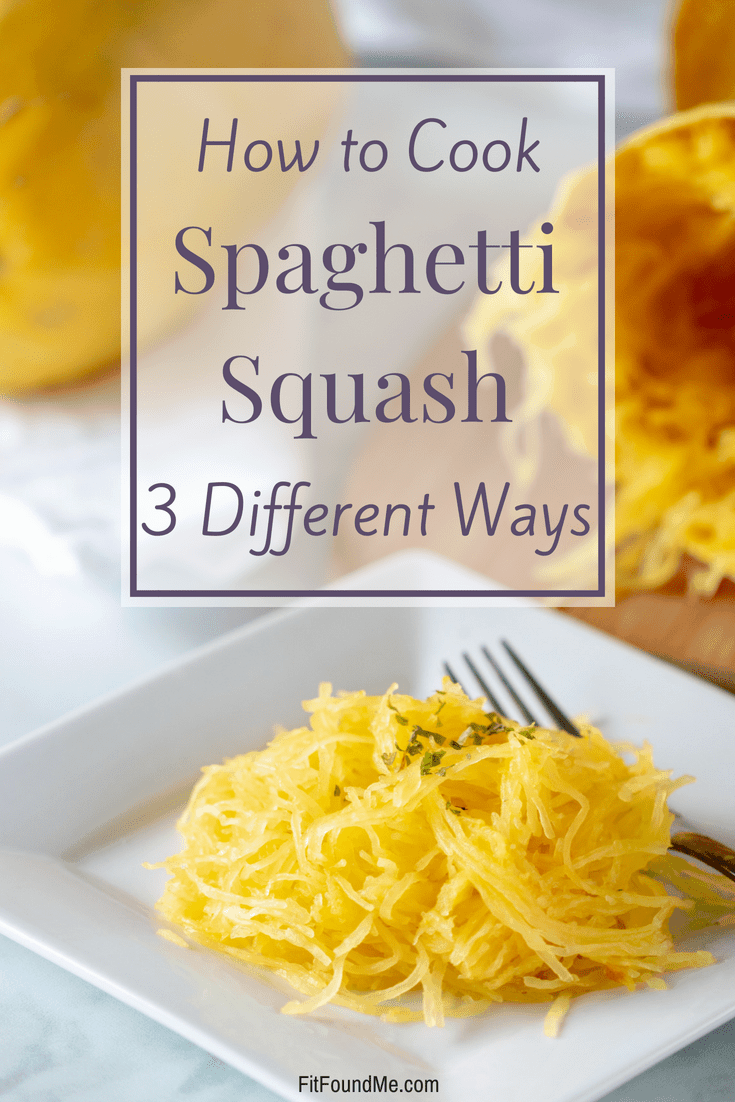 If you have never cooked spaghetti squash before you will be shocked at how simple and quick it can be!

So, maybe you are wondering why people are switching from enriched pasta to spaghetti squash in recipes. Honestly, you won’t serve it to anyone without them realizing it’s not pasta. While it is a good replacement, it’s not pasta.

If you go into this realizing that, I believe you will love it. The similarities between pasta and spaghetti squash are the recipes and use that it can be used for with ease. You will see exactly what I mean once you fix it…and love it, no doubt.

The health benefits of spaghetti squash are pretty impressive, especially if you are trying to lose weight by eating fewer carbs.

Spaghetti squash beats the pants off of pasta when comparing carbs, fiber and calories. Calories of spaghetti squash alone, even if you don’t track macros (which btw, you totally should be doing if you’re trying to lose weight) is worth ditching the standard pasta we grew up on forever ago.

There are tons of healthy spaghetti squash recipes available. So many different ways and varieties to include in your collection of recipes.

But first, don’t make the same mistake I did years ago.  Know the how to cook spaghetti squash from the start. If spaghetti squash isn’t cooked properly, the flavor doesn’t pop and the consistency is…well, rather gross. It was one of those meals when we all kind of looked at each other in hopes someone would suggest take-out instead.

First, How to Cut Spaghetti Squash 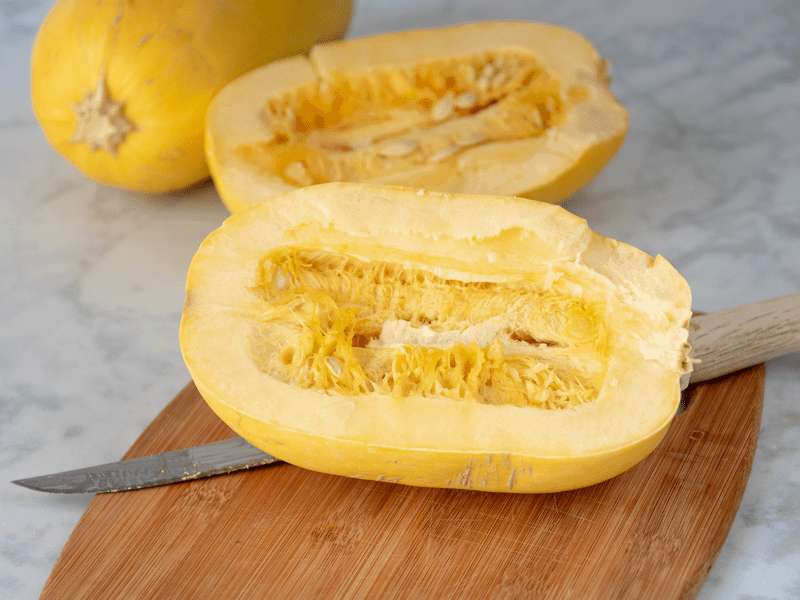 The first thing you want to do before you start cooking your spaghetti squash is to wash it. Simply rinse and wash with warm water and soap then dry it off. You will want to prep with this step first regardless of which method you choose for cooking.

How to cut spaghetti squash really depends how you are going to cook it.

But, no matter which method you choose, make sure to have a large, sharp knife to use since the squash is very hard prior to cooking. It is similar to cutting a watermelon, only a bit harder in texture.

If you are cutting the squash in half prior to cooking (see which method below) you may want to use some extra caution while cutting. As I mentioned, it is a very hard vegetable and using caution can help prevent a slip of the knife onto your hand.

If you cook the spaghetti squash whole, you need to poke the knife in a few times to release steam while it’s cooking.

How to cut spaghetti squash for cooking in the instant pot – leave the squash whole, poke or slice 12-15 holes in it.

How to cut spaghetti squash for cooking in the microwave – leave the squash whole, poke or slice 12-15 holes in it. 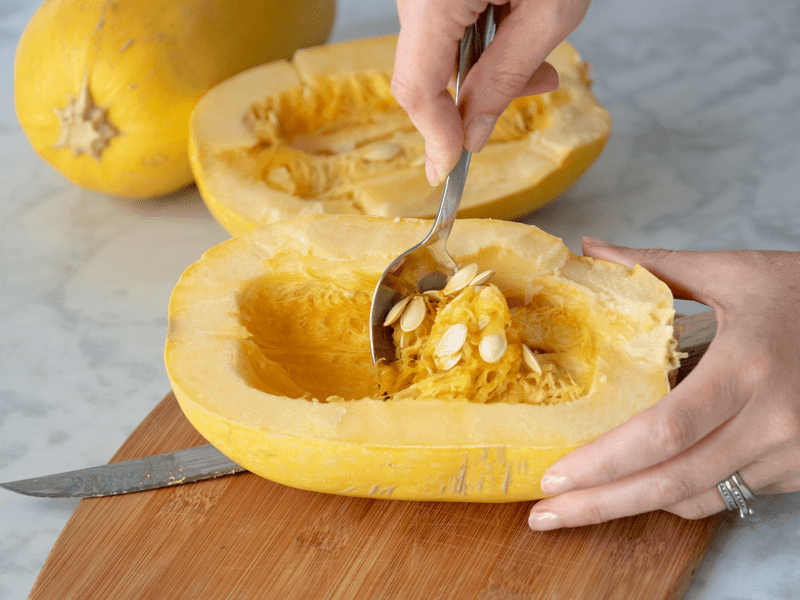 Now, you are ready to cook it.

How to Cook Spaghetti Squash in the Microwave

1. First, wash the spaghetti squash with warm water. Dry, and poke 12 – 15 holes in it with a sharp knife. You want to do this so the steam has a way to escape while it’s cooking.

2. Next, place the whole squash in a microwave safe dish and place it in the microwave.

5. Carefully cut the squash in half. You can cut it in half lengthways or crossways, depending on personal preference. I chose to cut in crossways so you could see the difference.

6. Scoop out the center with the seeds and discard.

7. From here, you will see how easily the squash pulp shreds into fluffy yummy strands. 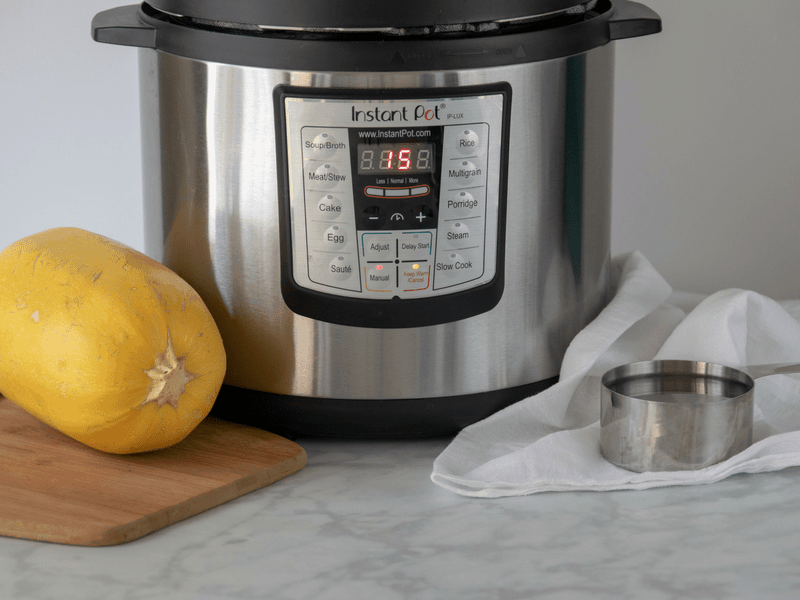 I am still fairly new to cooking in my Instant Pot, but I’ve cooked enough to know how much I love it. It caught my eye when I saw the weight loss benefits of the Instant Pot.

It is perfect for me for those days I should have started dinner 3+ hours before I actually walked into the kitchen. This pressure cooker is such a slow cooker dream for procrastinators like myself!

Side note: This is the Instant Pot we have, and we also gave all of our adult children one last year for Christmas. 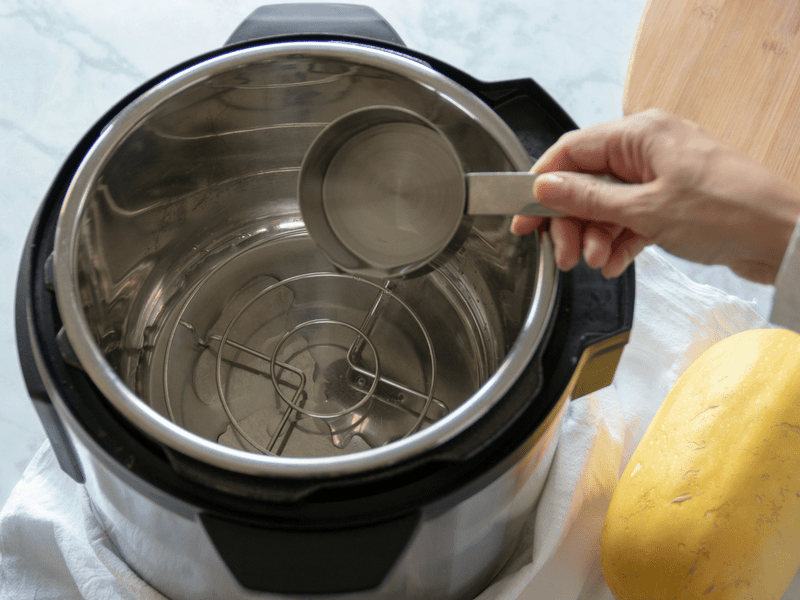 1. After you have washed your squash with warm water and poked 12 – 15 holes in the squash with a sharp knife, you will need to place the rack on the bottom of the Instant Pot. If you don’t, the Instant Pot will not be very happy with the squash or you in a few short minutes when it starts to burn. Also, add in 1 cup of water to help the steaming process. 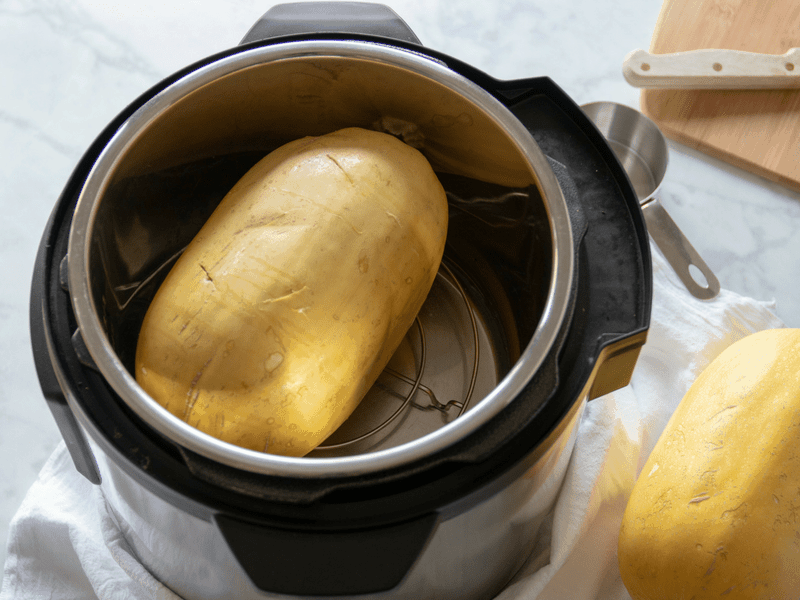 2. Next, place the squash on the rack into the Instant Pot.

3. Cover and seal the lid. Make sure the steam valve is closed.

5. After the 15 min, release the steam valve completely and remove the lid.

6. Let sit and cool for ten minutes as it will be hot to the touch

7. Carefully cut the squash in half. You can cut it in half lengthways or crossways, depending on personal preference.

8. Scoop out the center with the seeds and discard.

9. Take a fork to pull out the pulp and see how easily it pulls apart to form the shredded squash ready for your favorite recipe!

Cooking Spaghetti Squash in the Oven

Honestly, if I have the time, this is my preferred way of cooking spaghetti squash. I love the roasted taste of anything, especially veggies.

Cooking spaghetti squash in the oven is time-consuming. Not hands-on time consuming, but of course, it does take longer to cook.

1. Just like the other methods, you will need to wash the squash and then poke 12 – 15 holes in the squash using a sharp knife.

2. Once you’ve done this, you are ready to cut the squash in half, lengthwise.

3. Scrape the seeds out and discard.

4.Place the squash face down in a baking dish. I like using a pyrex dish. 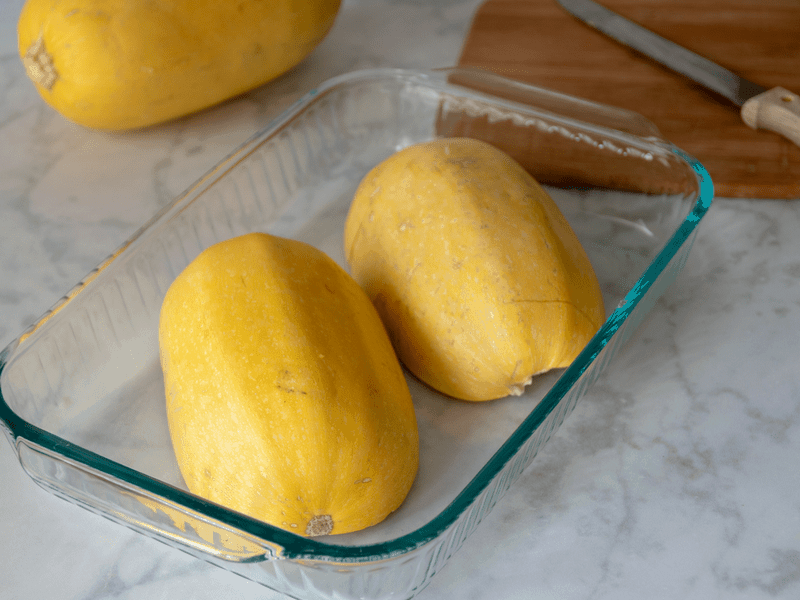 5. Bake in a preheated oven at 350 degrees Fahrenheit for 30 – 40 minutes, or until it begins to cave in a bit and tender when you stick a knife through it.

6. Take it out of the oven and allow it to cool for about 10 minutes so it won’t be as hot to the touch.

7. From there, you want to flip the squash over and using a fork, pull out or scrape the pulp. 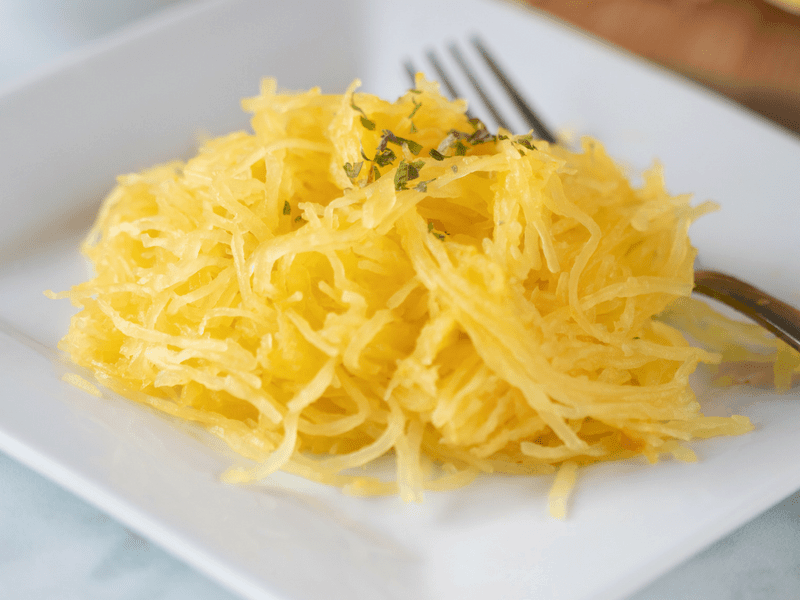 Spaghetti squash is a Fall favorite of ours. I hope you enjoy using this vegetable to add healthy nutrients to your diet and have fun experimenting with different ways to serve it!

So there you have it. Three easy, simple and delicious ways to cooking spaghetti squash. No matter what your time, what equipment you have, spaghetti squash for dinner – or any meal is at your fingertips.

Now that you know how to cook spaghetti squash perfectly, you can start experimenting with your favorite spaghetti squash recipes! This Spaghetti Squash and Meatballs recipe is a great one to try tonight. 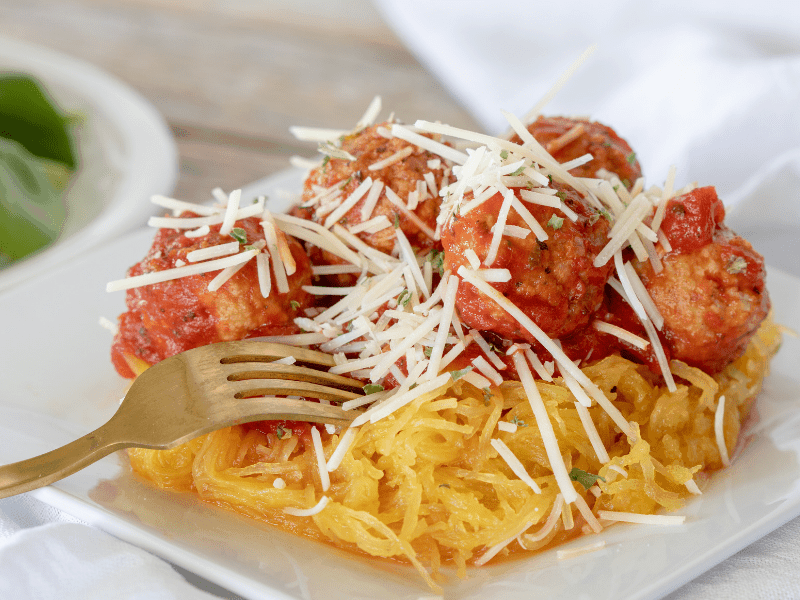 Are you ready to give the squash a try instead of pasta? 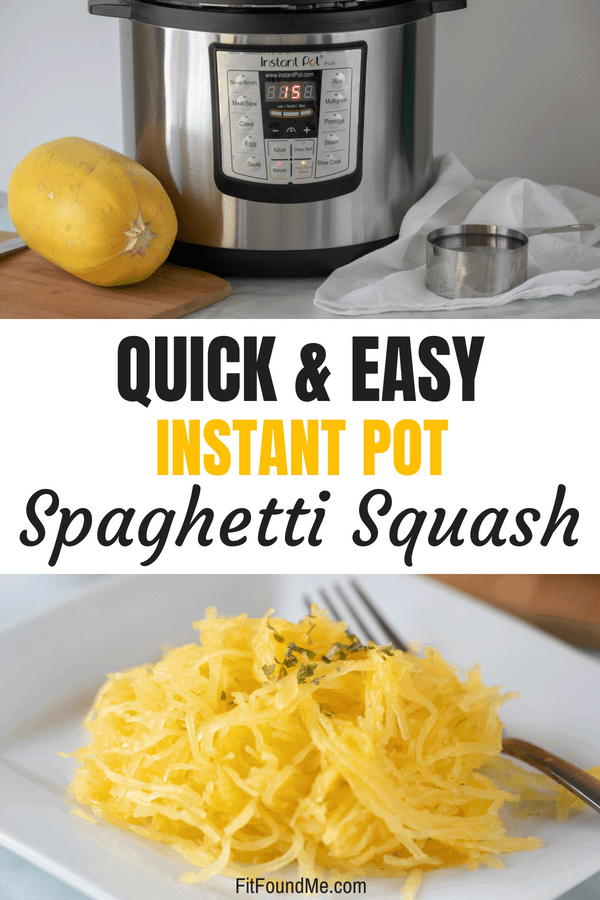 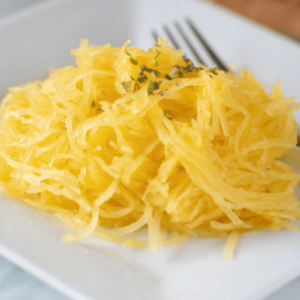 To Cook in the Microwave

To Cook in the Instant Pot

To Cook in the Oven

Serving: 1cupCalories: 40kcal
Keyword Vegetables
Tried this recipe?Tag me on Facebook @fitfoundme with a pic and let me know what you thought of this recipe in the comments below!

Being on a limited diet I cannot have a lot of pasta so I am super excited about trying this out! Going to add this to our menu this week.

Oh yes, Tracy, I think you will love it!

Tried this in our new instant pot, surprised how good it tasted! Better than regular pasta

So glad you liked it!

This looks so good!! I can’t wait to make this at home!

You are going to love it! The versatility is amazing! 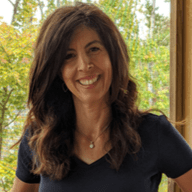 Hey! I’m Stephanie and after struggling for years, I finally lost over 35 lbs after 40. I started this website to share everything I did then and what I am currently doing to keep the weight off, now over 10 years later! I enjoy sharing my favorite easy, quick healthy recipes, fitness and anything else that can help you lose weight and reach your healthy lifestyle goals. I invite you to read through the site, sign up for weekly tips, reach out if you have questions and even join one of my challenges to get support through your own weight loss journey.